Free shipping to United States (US) for orders over 100 €

Winter vacation in the end of February 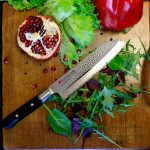 We are very proud to inform, that MyGoodKnife became an official dealer of Kasumi knives (SUMIKAMA Cutlery) in Finland and Estonia. Since 1916, SUMIKAMA has been devoted to manufacturing high-quality and value-added cutlery using the over 780-year traditions of Seki swordsmiths and its outstanding skill to harmonize new technologies with new materials. Entering to the world market only in 1990-ies, company have managed to stand on a par and even became more successful than many of the famous manufacturers of knives from the Japanese city of Seki. The Gifu Seki Cutlery Industry Association comprises of 53 companies in and around Seki. The cutlery industry in Seki is characterized as its multi-product and small-lot production, by which various new products based on the combination of traditional craftsmanship and modern taste are produced. The origin of the Seki cutlery industry dates back to the 13th century, when Motoshige, a master swordsmith from the Kyushu region moved to live in the area. A lot of master swordsmiths appeared after Motoshige. However, when peace time came in the late 17th century, sword demand fell and some swordsmiths turned to blacksmiths making agricultural tools, such as knives and sickles. Now kitchen knives (50% of domestic […]